"KW always gets his man."

Sox fans repeat this mantra every off season and all season until the trade deadline every year- applauding KW on such acquisitions in the past as Nick Swisher, Carlos Quentin (not someone like him.. THE Carlos Quentin), and most recently, Jake Peavy.

But there may be one man, or 4, that might be a little hard for KW to capture. As close-knit as they come, Ozzie Guillen and company are your overly entertaining, Hispanic Catholic, "mess with one of us and you mess with all of us family." A lot like mine- Just replace "Hispanic" with "Irish." There's nothing my family wouldn't do for me, and if you cross me the wrong way- watch out. You'll have 3 cops, an ex-cop, an ex-fire captain, and one VERY angry Catholic school teacher all over you. Not to mention a slew of other aunts, uncles, and cousins that would just as easily verbally kick your ass as they would sneak a flask of Jameson into one of our family's many weddings (and a rosary, mind you).

Which is why after spending my one evening off of work on Twitter, drinking a glass of red wine, and watching Field of Dreams for the 15,495 time, I'm officially in 100% support of the Guillen family.

Now here's the back story.

The middle of three of Ozzie and Ibis' sons, Oney has held a position with the White Sox in the scouting system for a little over a year.

Like the eldest son of the family, Ozzie Guillen Jr., and his father- famed manager and all-around bad-ass, Ozzie Guillen Sr., Oney has a twitter account set up to reach out to family, friends, and fans. A low number of followers (340) compared to his father's (42,773), Oney's twitter consists mainly of quirks, updates, and opinions here and there. (Unlike my personal twitter which chronicles everything from what I eat for breakfast to quotes from what episode of The Office my roommates and I happen to watching.)

It was no surprise that when Ozzie Sr set up his own Twitter account to personally connect with fans and friends (and I say "personally" because Ozzie made it clear that his twitter was specifically about his personal life), there was a backlash from the White Sox front office. Kenny Williams and Ozzie haven't always seen eye-to-eye. Most recently KW has publicly expressed his doubt in Ozzies DH-by-committee idea for the upcoming 2010 season. When Ozzie exploded onto the twitter scene in such a way that blew his call-in to Mike North on 670 The Score out of the water two weeks ago, KW had something to say about that too. 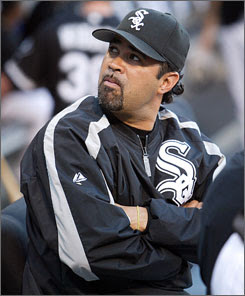 Ozzie expressed that his twitter account would be used for personal reasons only... and why not? Ozzie Guillen is human. He has a mouth on him, he's a manager of a major league baseball team, and was once one of the best short stops in the game- but he's only human. No one complains that Nick Swisher, Jason Grilli, CJ Wilson, or even the Sox's own Mark Teahen has a twitter. So why should Kenny Williams care about Ozzie's? Maybe it was that Ozzie doesn't have a filter, or that he IS the manager of a potential division-winning 2010 team, but should that really matter? As long as Ozzie's not tweeting on his blackberry during the 7th inning of a game, is it really Kenny Williams' business?

The answer to that is an obvious "no."

Ozzie may not be from America but as a citizen he's protected under this nation's First Amendment.

And as a dual-citizen of both Venezuela and the USA, so is Oney Guillen.

Oney was told in a round-about way by Kenny Williams to "tone down his tweets." I'm not sure, after reading all of Oney's tweets over the last week or so, what he was supposed to "tone down." Perhaps his excitement about seeing his brother at dinner, or having fun playing poker with his family, or his tweet about going to wrestlemania? Nor do I understand how that affected the White Sox front office, or scouting dept., but apparently it pissed off KW.

Oney responded by stepping down from his position and a very equally (and rightfully so) pissed off Ozzie Guillen refused to talk to Chicago press or media after the Sox loss to the Cubs this afternoon.

The drama surfaced a few days ago when Oney tweeted "I love it how people are monitoring my tweets like I'm someone important. Everyone is entitled to there own opinion"

After we found out that Oney had resigned from his position with the Sox, Ozzie tweeted "Hey kid we are behind you. no matter what"
Ozzie also apologized for his snubbing of the Chicago media today via twitter saying "I extremely apologize to the chicago media from the bottom of my heart but it wasn't the right time for me to talk and hope this doesn't ... affect our relationship... also the respect I have for all of you tomorrow is another day"

Ozzie makes contact.......this could go a long way.... the center fielder is running back, back to the warning track, he looks up... and that ball is OUTTA HERE!!!!

Now let me just go "mom" on everyone for a minute. I have a two year old son. He's the love of my life. There is not a thing I wouldn't do or a bullet I wouldn't dodge for my child. One of the first words we taught him was "ozzie"... now he runs around the house saying "Ozzie!" whenever we ask him where the Sox are, and claps for himself. My child is the love of my life and I imagine that when I have more children I will feel just the same about them. My grandmother told my mom when she was pregnant with my little brother that "love for your child doesn't divide, it just multiplies."

I hope to God (and I wouldn't even have to hope, because I already know) that my father would stick up for me and be just as equally pissed off as Ozzie was for his son today.

Ozzie is a father. He is a major league baseball manager. But it is his first and foremost duty to protect his children. Today shows me and reaffirms every love I've had for Ozzie Guillen since I was a little girl watching him play for the White Sox. Ozzie Guillen is a lot of things, but above all he is a father, and today he showed that.

The first time my son was sick after he was born, around 8 months of age, I left him in the care of my parents while I went to work on a Friday night.

I may or may not have rung 80 things in wrong while bartending, dropped 4-5 drinks, and had to go on at least 7 "cigarette breaks" to call and check on him. All he had was a fever and a runny nose. Nothing life threatening, nothing that he probably even cared about. He slept the entire night, was given some Children's Tylenol, and was fine. And he was in the perfectly caring hands of my parents.

With that said, I can't imagine the distraction Ozzie Guillen must have been under after hearing of all the stupid CRAP going down with his son today. Could that have affected the outcome of today's game? Don't get me wrong- I'm not a Cub fan. I don't make excuses for how my team plays... but any baseball fan knows that a team plays well that has a great manager. A manager that is in the zone, in the game, and is 120% focused. Was Ozzie Guillen 120% focused today? I'll tell ya what, I wouldn't have been even 50% focused enough to manage a baseball team if my son were under distress or going threw the crap that the organization I had won a World Series Championship for had treated him the way Oney was treated.

I just have one question for Kenny Williams and whoever else was so "offended" by Oney Guillen's tweets- why the hell do you care?

Shouldn't you be more concerned about a lack of a big left-handed bat in the lineup? Or the fact that Scott Linebrink sucked AGAIN today? Or how about the fact that we left, oh, I dont know, 249120481947921 men on base today? What about Danks' outing? Or maybe the fielding by Teahen last week during the Sox/Cubs game? Maybe giving up extra bases on the first play of a game is something you should be spending your time analyzing? Perhaps that fact that Bobby Jenks gave up 5 runs on 4 hits this last week.... or that Ramierez is STILL chasing shit outside? Maybe, Kenny Williams, you should concentrate on THAT instead of Oney Guillens twitter account?

Perhaps KW should heed his own advice when, according to Joe Cowley's article in the Sun 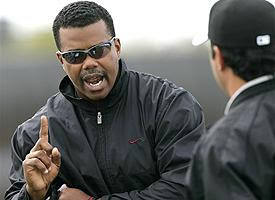 Times, he responded to inquires about a website with "don't talk to me about twitter, websites, blogs....." Maybe, KW, you shouldn't pay SUCH CLOSE attention to things posted on Twitter? Are you an Internet babysitter in your spare time? Are you getting paid extra for that? I'd prefer knowing your head was in the GAME and was dissecting what was going on on the field rather than was was going on on Oney, Ozzie Jr, or Ozzie Sr.'s twitter accounts.

The fact stands. These guys (and the youngest, Ozney) love the White Sox. They love that team with every bone in their body. To think they would do or say anything to hinder or embarrass the team is insane. The boys are close with both Suntimes and Tribune White Sox beat writers. They banter back and forth... they all joke around with eachother. The relationship is fine- and Chicago LOVES THE GUILLENS.

If KW is so concerned about what they are tweeting about he needs to find a new hobby- one that doesn't involve what happens with people OFF the baseball field. Maybe he should start monitoring Mark Teahen's "Quotes of the Day" on twitter which involve making fun of White Sox pitching coach Don Cooper. Maybe THAT is more out of line than whatever the Guillens are tweeting- or maybe Williams has a vendetta. Who knows? All I know is that even my 44 year old father doesn't monitor my tweets as closely as KW monitors the Guillens and something, my friends, is wrong with that picture.

So to Ozzie Guillen, and every other father who puts his "dad" role first- kudos. I'm glad to have such a family driven, amazing man managing the team I love to root for. It only makes me that much more passionate about the Sox, and about you as their manager. I've been a big Ozzie Guillen fan since I was 5 years old and as I grow up I only become more and more enthralled with Ozzie and his family. His sons are a group of amazing, well behaved, respectful young men. I'm proud to call Ozzie one of my hero's, a great manager, and a father that ranks in the top percentage of dads in my book. My father and Ozzie have the same "I don't care what you think about me" attitude, and I love it. After today, I more importantly, love that I know Ozzie and my father have the same "don't you care screw with my kid" attitude. Good for you Ozzie- I back you and your family 100000%. Now let's get out there and win another division title!!